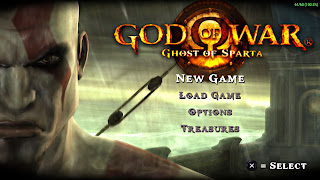 God of War: Ghost of Sparta is a third-person action-adventure video game developed by Ready at Dawn and published by Sony Computer Entertainment (SCE). It was first released for the PlayStation Portable (PSP) handheld console on November 2, 2010. The game is the sixth installment in the God of War series and the fourth chronologically. Loosely based on Greek mythology, Ghost of Sparta is set in ancient Greece with vengeance as its central motif. The player controls the protagonist Kratos, the God of War. Kratos is still haunted by the visions of his mortal past and decides to explore his origins. In Atlantis, he finds his mother Callisto, who claims that his brother Deimos is still alive. Kratos journeys to the Domain of Death to rescue his brother. After initial resentment from Deimos, the brothers team up to battle the God of Death